Now the exhibition is over, I thought I'd post a few thoughts here. I was overwhelmed by all the support I got at the Private Views and throughout the exhibition - so thanks to all who were able to make it.

My parts of the exhibition remain on show in the online catalogue at www.paulclifford.co.uk/photography-exhibitions/photographycollective2011.html . I've linked all the references to the images in the text below, and the image thumbnails too,  so you can click and see them in the catalogue.
The selection process over the last few months, hand in hand with my Photography Collective colleagues, proved very interesting. When you have a wide range of images to choose from, it's difficult to know where to start. Over the months I showed various different selections of images at the Collective, and when I brought in the Door and Window images they really lit up the table, so that's what I went with this time.
I knew I had a few door/window window/door images over the years, a naturally occurring theme that has cropped up of it's own accord. It's only when I looked back over the 4000-strong collection of images and poked and shook it to see how many of these images fell out I realised just how diverse and yet complementary those pictures were.

First I weeded out vertical shots, and those with two or more doors or windows (of which there were a few, enough for another show!) which left around 30 or so I was happy with as I recall. These were then boiled down through various avenues to the eleven that made it to the walls of the main gallery.
To complement those I shook the collection again and made a personal selection of 10 window images, which graced the stairwell and entrance hall in little groupings designed to work together. To finish my part of the show I added two pieces from 2010 - both somewhat of a departure as they each included 5 cropped images from the collection.
I had a few good discussions at the Private Views, and did some good eavesdropping too. A popular game was guessing where each image was taken, before reading the solution on the Title List. I hadn't thought before about how much of the location's identity the images hold.
The rundown nature of the post communist Latvia shown in 2387 was a popular talking point. On a chilly late winter evening the warmth emanating from 1093's Cuba and the India of 1395 was also appreciated.
Everyone agreed image 35 was very London, and image 1614 very Irish (no room for them here, click the numbers to see them in the catalogue). The locations were in fact a good starting point for many a conversation about the pictures - very useful!
Probably the most popular image was 2208 - an oasis of calm in the hustle and bustle of the Private View. Closely followed by the exotic hanging gardens of 1642.
It was the quiet little moments in the pictures that drove most of the comments and conversations. Having spent so much time with these images over the last few weeks there are a few little details that I'd like to show you here.

Here's a little mysterious object from 2208 . Looking at the rest of the image, if it's a burglar alarm, it's a very optimistic one.  The three  main elements that make up that image seem to me to create a perfect balance in the frame, somewhat unreal yet very homely at the same time.

This is one of the huge range of tiny destructions that have waged war over the years on the facade of the poor, forgotten store in Rely-a-Bells. Of all the peeling paint, missing letters (where are they now?), rust and vandalism, it's this little detail that gets me the most. Someone, sometime, taped around this breakage in the hope of containing the damage, hopefully to fix it another day. Another day never came, all that remains is the ghost of their ambition and care.

An odd fixture, this time from 2224. I like how the residents have carved out the wall to leave the cable flush, another example of a half finished job, which really should have been plastered over. Maybe the cable going in at the top of the image is the same one - who knows?

This lamp shadow is from 1723. Along with the scrawls all over the wall, it's a little detail that pushes the picture that bit further. A shadow can give a real sense of place and time to an image, and this one takes the window away from being a more abstract composition like some other windows in the show are. 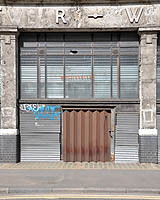 Rely-a-Bells again. Those five pictures, along with Keenest Prices are really a wealth of interest for those with the time and inclination to look. Some viewers took the images to be the same door over time, or the same image ten times over. I took great pleasure in giving 'guided tours' of these pictures at the private view.
On the left - one of the Rely-a-Bell alarms that give the piece it's name. One comment I enjoyed was that Rely-a-Bell and Modern Alarms tells the story of twentieth century design in a single inch of image. On the right - the front door. The scale of this always took people by surprise when I pointed it out - these facades are BIG. At some point soon I'd like to put all these images together for a full panoramic experience on the website.

Finally, probably my favourite small moment, from a show that was very much all about them. This is from 1614, an abandoned farmhouse in Ireland. I find this little light switch and fitting really poignant. How many times did someone come home and flick the switch to find their keys in the dark, before opening up the door and coming home? And now... well, you can see for yourself.
Well, that's just a few thoughts. If you've read this far - thank you! Please do have look at the catalogue at www.paulclifford.co.uk/photography-exhibitions/photographycollective2011.html and do leave a comment below about the pictures, the show, or my ramblings here. I can see from the stats that there's a fairly regular audience who's reading. What do you think?
Posted by Paul Clifford Photography at 23:35