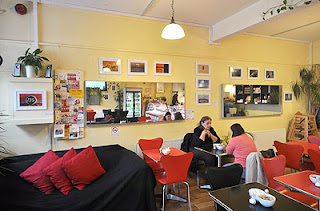 Two bits of news here - an exhibition and a fair, very close to each other, so keep reading - why not visit both?

My exhibition at Libertea in

North London, near Finsbury Park/Archway has been up for a couple of weeks now. The pictures are a selection of new work (with 2 special guest prints from the past!). I'm very pleased to say the reaction has been really positive from visitors.

I chose the images specially to go with the space at Libertea, and you'll see pictures from around the UK, Venice, Sweden, Cuba and India. All the pictures are for sale, as both limited edition hand printed archival quality framed prints and smaller, more affordable, framed prints - ideal for unique Christmas gifts.
Libertea is a lovely cafe with a really relaxing atmosphere - perfect for a chilled out lunch 7 days a week! Find out more at www.liberteacafe.com. There's also a map below you can click on and print out.
Libertea, 159-163 Marlborough Road, London N19 4NF.
Opening hours: Mon-Fri 7.30am to 7.00pm / Sat-Sun 8.30am to 6.30pm
Additionally, I'm going to be showing a wide selection of prints at The Old Fire Station Winter Crafts Fair at The Old Fire Station, 84 Mayton Street, London N7 6QT on Saturday 3 December, 11am-5pm. My setup will be similar to Photofair a few weeks ago (see here). I'm assured there will be a range of arts and craft stalls, free workshops, live music and a pop up cafe. All stalls have been sold so there'll be lots to see and lots of gift ideas. For total disclosure, I should also mention it's £1 to get in, 50p concessions, under 5s free. All the details are at www.therowanartsproject.com/wintercraftfair .
The best news of all? These two events are just down the road from each other! So why not come and see me on the 3rd, and then go along for a coffee, tea or lunch at Libertea! Irresistible. Here's a map with both locations on. Click on it for a bigger version you can print out so you don't get lost. I look forward to seeing some of you on the 3rd! 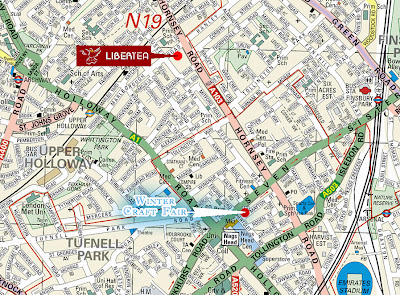 Some days I just 'get it'. When the light is right, I have time on my hands and a camera in the bag - I see pictures everywhere in everything.

This was one of those days - a set of goalposts bound by chains and lying in the grass at the edge of a park became a source for some fascinating compositions. There are infinite ways to shoot an element like this - the choice of framing and angles giving an infinite choice of images - here are a couple of them. To me, the first resembles something secret, even dangerous, the second a kind of ending, a loss of energy.

Stuck at a motorway services for an hour or so, the best way to fill the time was to have a wander and see what images I could find - one of my favourite pastimes. A totally unfamiliar and unusual location, an entirely open ended proposition.
These railings went over the top of a motorway underpass, the path going underneath it. I was struck by the way so many diagonals could be made to cooperate so beautifully. As we saw in Part Four, a point of view can bring a peace and contemplation to almost anything.

Down into the the tunnel, I was struck by how sparse the design was inside. It framed the two exits beautifully. Above, the first one leads back towards the services, the second out into what seemed like wild country after the car park and traveller's motel. And the pictures tell you all you need to know.

The design was, as I said, sparse. And straight. And square. Astonishingly so. This image captures that. Exposed to show both the elegant simplicity of the layout and the grim misery of the lighting, I like how the last bulb kicks across the picture.

One last shot here of the tunnel - a crazy mix of two ways of going about things.

I love the way the shot is bisected by the line on each step, the asymmetry of the railing providing a nice counterpoint, leaning out as if to expose the steps even more.

A lovely set of garages. As with so many of my shots in sequences, the key is in the differences. Setting each door in an image twice when possible, once with each of it's neighbours, allows you to see it in a different context. Obviously everyone here has their own door and lock in their own colour, but what I like best is that even the pelmets at the top have been individualised by choice, and the front 'lawns' are all so different depending on use, or on levels of interest and neglect.

A sunny day can do wonders for the most mundane edifices. The ghostly, watery reflection here adds an elusive, painterly beauty.

A more regimented reflection here suits the wall behind it. I think the somewhat unbalanced composition here works because of the weight the triple reflection carries, anchored by the horizontal strip fleeing from the right hand side of the image.

Reflections again - here working more like a version of a shadow. The No Parking text is made inconsequential and clumsy, almost accidental, a minor player beside the strong play of light.

Like some of the shots in the last part of this retrospective, I feel someone else has done a lot of the work for me here. And, also like some of those shots, it looks constructed, too odd to be true. The centre of a square area, where the four sides don't quite meet as they should, this innovative solution sorts it all out in an audacious fashion, unnoticed by those who walk across it every day.

Another image created by the frame. This seemed so English to me, the terrace, the clouds, the green. In a way it also reminds me of the garages earlier on - one home, one chimney, each the same but different depending one the requirements and desires of the residents.

When it's right, it's right. The perfectly straight shadow, the two vents I could place centrally, the wall with it's myriad interest. Irresistible.

I really like this one - I enjoy shining a light on inconsequential details like this. As always - nothing was moved, the leaves here falling as they may across the composition. One creates a kind of comet at the centre of the image. I can't imagine trying to move them to make a natural balance.

Like the paving in 3975 above, a practical solution to an impractical task, this time where car parking spots bend around a corner. The leaves add a casual sprinkle to the picture again. Initially I was frustrated with the car popping in no matter how I tried to shoot the markings, but I found a way to use it, the cheeky eye peeking in, adding a curve of pure colour as well as emphasising what the painting is there for.

Posted by Paul Clifford Photography at 23:47 No comments: