Harvest of 2010 Part Four - Helping Your Mind to Relax

The fierce contrast in these road markings was so visually striking that I spent a good while here framing up some very curious pictures. I like the dizzying effect created by the high angle in 3843. These are images taking the everyday and pushing it towards abstraction, while still hopefully being recognisably mundane subjects.

Another one of those mysterious shots that I don't know why I love. I always like symmetry in an image, I often try and create images that are easy to look at - not in an unrewarding way, but in a way that means your eyes and brain can relax and slowly take in an image. It's like giving your mind a rest and a stimulus at the same time. A formalised layout helps with this, and of course helps you notice differences in the symmetry. Here I like how the hedge on the left seems to be devouring the window, and how the centre bottom window peeps out. And there are benches again - these look so uncomfortable, almost like battering rams facing off against each other.

Taken on the same day as 3850 above, in a completely different place. Symmetry again, I imagine the earlier image was still fresh in my mind. Again, to me this is a very comfortable image, with enough elements to keep the viewer busy.

Here the idea was to keep the red grid nice and square, contrasting with the receding bricks and the fuzzy buildings in the distance. I thought the red and yellow would also add interest. Not sure if it's quite interesting enough in the end, but here it is!

I work in series a lot, for example when there is a row of features that interest me, again it's about framing formally to accentuate the differences. Here's a whole series in one image though. Twelve wonderful windows. Look out for the way the opening windows on the right of the top row make a neat horizontal row, and the floral effect created by the broken blind in the bottom right window.

A real favourite of mine - a magical moment. The transmitter/aerial seems to be calling to the cloud and the building seems so marginalised and small beside the far off, light, vaporous cloud. I don't want to say much more about it.

Something a bit different for me, this one is really about the colours of the people seeming so out of place, even the pool looks more at home, sharing the qualities of the water and stone that surround it.

I'm always on the lookout for where two very different surfaces meet. By framing them in a half and half fashion like this they become somewhat unreal, and look like a kind of collage. Easily done artificially, but all my images are real!

This one has a few things going for it. I think the colours are great, the strong red vein screaming across the green. I like the panel centred at the bottom, and the lamp just feels so futile.

Looks to me like a couple of characters having a chat - it's strange how it's so easy to apply human characteristics to inanimate objects.

Not dissimilar to 3858 above, the disparate elements from above creating an odd feeling. The N shaped bar in the centre really appeals to me - such a lyrical shape for a practical object.

This one is all about the wall - and the other parts that aren't the wall.

Another lamp post - the light really was this odd sickly colour in the afternoon. Lots of nice lines chopping up the image.

A sublime piece of architecture where three buildings meet - all I had to was choose my frame.

I've written before about looking more at the subject once I have the image back in the studio, rather than on the day I took the photograph. This picture of the side of a chapel is a great example. What I was after was the five windows, and the mossy roof pushed up nice and high in the image, with the three vents cutting across the centre of the picture. I got all that, but I also got the stones in between the lines of bricks. It was only when I was prepping the picture for print that I took a look at the detail - what emerged was a sequentially numbered collection of memorial stones. They were so quiet and subtle on site I never noticed them. It told me a bit about memory, and about dignity.


That seems like a good place to stop for now - more next time!

Email ThisBlogThis!Share to TwitterShare to FacebookShare to Pinterest
Labels: Paul Clifford - Harvest of 2010 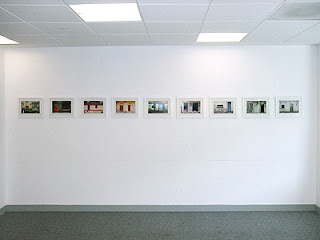 My newest exhibition is now up and running at Voluntary Action Islington (VAI) at 200a Pentonville Road, London N1 9JP.

The work on show is almost the same as I showed at the Rooftop Gallery back in March (catalogue here), only now the Door and Window series runs across a single long wall, and the Windows are all together in a single cluster. I think they look great.

I decided to give these pictures another airing for two reasons. One is that public access is limited to this show, so I didn't want to show new images that a lot of you wouldn't be able to see.

Another, more exciting, reason, is that the show is in a large and busy conference room, so will reach a very different audience to that of a gallery or museum show. I'm really looking forward to feedback on the pictures from such a different audience.

10% of print sales will go directly to Voluntary Action Islington, a great organisation that supports all kinds of local charities. Their website is here.
I hung the show yesterday with the generous help of Chris Avis, whose Mannequin Dreams are also on show at VAI this month. Learn all about her pictures here - www.candidarts.net/members/profile/86.

The show is open throughout July, Monday to Friday 10am-4pm. However, the conference room is not strictly a public area and is very busy with bookings throughout the month. If you are passing, it's certainly worth dropping in. However, if you are planning a special trip, it's worth calling Duncan at VAI first on 020 7832 5829 to check if there will be access. 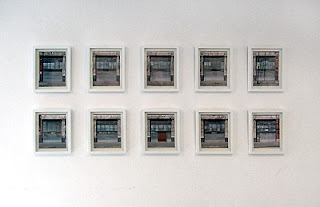