Less than two weeks until the next show - Photomonth Photofair 2011

I'll be showing and selling work at the free event 2011 Photomonth Photofair, held in the bustling Spitalfields Market surrounded by shops, restaurants and cafés on Saturday 8 October 10am – 6pm. The address is Brushfield Street, London E1 6AA . It's just a short stroll from Liverpool Street station - map here, all details here.

I'll be showing work with two other members of The Rooftop Collective (which you may have known previously as The Photography Collective) - Mireia Guitart and David Aston. See Dave's website here, Mireia's here (and don't forget mine at www.paulclifford.com of course!).
My part of the exhibition will be all never-before-seen prints from 2010 and 2011. I'll also be selling prints at prices to suit all pockets! Come along and see us!
Posted by Paul Clifford Photography at 18:37 No comments:

Gone and Not Gone

I was near Alie Street in East London recently, and thought I'd visit a grand facade there that I had photographed last year as I'd become a bit more attached to the building than I had to others I've shot.

Usually it's case of getting the picture, noting the location/address for my records and moving on. I rarely revisit locations purposefully, neither for nostalgia, or to repeat a picture. But with the site on Alie Street I had reasons to be a bit more interested.

I had taken some time that day in 2010 collecting the shots of each frontage along the ground floor - each composition matching the rest so they could show the subtle differences between them. Later, I was lucky enough to be able to discuss the shots and the building at two Private Views when the pictures were collected and exhibited as Keenest Prices and Rely-a-Bells. Then, as a reaction to those discussions, I reworked the images as one long facade - Ten Faces. It's this kind of collection, presentation, discussion and reaction to create something new like Ten Faces that I would love to do more of given the time.

I was asked a lot of questions about the building, which was formerly a knitwear warehouse, and a quick bit of research told me the building was going to be knocked down to build a new high rise. I noted this, and put that event in my mind at some point in the future.

Well, you can probably guess the site that greeted me a few weeks ago - 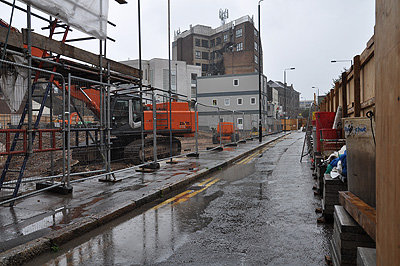 The grim rainy day suited what I saw behind the wooden street panels. That's the very same pavement you can see in my pictures -

That night, a bit more research showed up a couple more pictures from earlier this year.
(all respective copyrights to the original photographers) 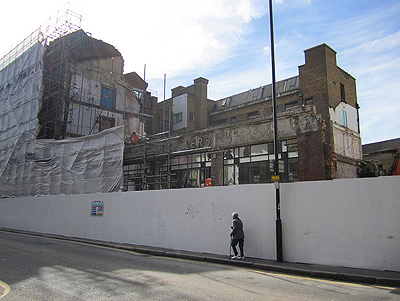 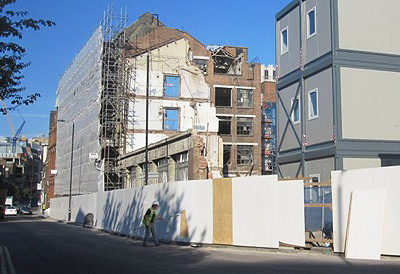 Now, I'm not sure how I feel about all this - hundreds of buildings that I would find beautiful are torn down every week and I'm not necessarily a campaigner for derelict buildings to be preserved. Indeed, a lot of the buildings and details that I have shot over the last 20 years will now be gone.
Although I had a particular relationship with this one, I feel that I have the pictures I wanted, and there isn't really anything more I need. I hadn't planned to get any more shots when I paid my return visit, I just wanted to see it again as I was nearby, out of the context of the pictures I had now spent so much time with, and now talked so much about.
Seeing the facade itself half gone in those two pictures is more affecting to me than finding the whole thing gone in person - I found this a little surprising! I think it might be because a half-gone facade resembles my pictures are being ripped apart, probably more so to me because that event is being shown in pictures too. The disconnection between the subject and the image is what a lot of my work is about, so my emotional response to the pictures rather than the reality seems fitting.
My images of Alie Street aren't going anywhere, the whole ground floor facade preserved as a representation of what was once there, on that day, under that sunlight, with those puddles and shadows. Whether the fact that it isn't there in reality any more adds or subtracts from the images I'm really not sure. Feel free to post your thoughts below and help me think it through!
To finish, here's a make-believe image of the eight storey hotel that may or may not eventually replace the warehouse. This time we have a picture of something that isn't there, never has been there, and possibly will never even exist. 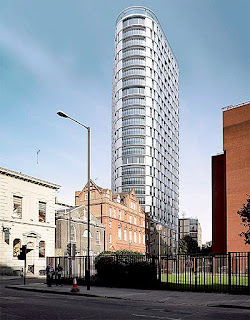 Posted by Paul Clifford Photography at 21:59 No comments: