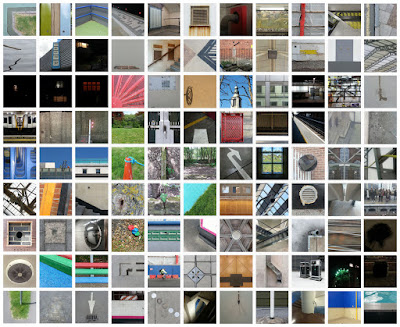 Last time, I wrote about the six things I'd learnt during my first month of posting an image daily to Instagram. Click here for that post. I recently posted my 100th daily image - so here's six more things I've learned, this time after 100 days (and a bit) on Instagram.

Note - I struggled last time with differentiating my DLSR camera pictures with my Instagram phone pictures. For the sake of this post, I'm going to call my DSLR work 'Gallery images', and my phone pictures 'Instagram images'. Which isn't to say I wouldn't consider a gallery show of Instagram images, or that I'm not proud of them - it's just a shorthand to save confusion. 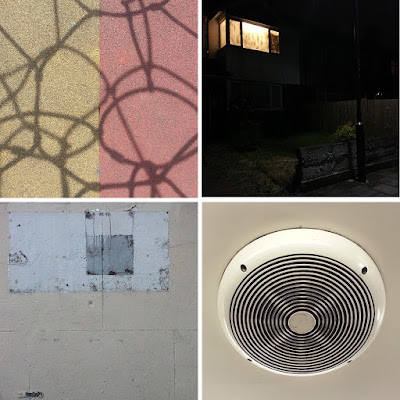 Last time, my first lesson was 'it's great to take pictures wherever and whenever I like'. Back then, I was just getting used to being able to take out a camera anywhere anytime and frame what I saw. A couple of months on I would add that this ability had led to some great pictures, and series of pictures, that I would never have considered taking if not for the ever present camera in my pocket.

An increasing number of my Instagram pictures have been taken of the architecture of playgrounds when I've been with my children, and without a camera to hand. I have shot in playgrounds before (the 'At Play' series for example, blog post is here). I like the clash of colours and the outlandish design, all worn down by months or years of use. The top left image above works particularly well in the square format I think, and also ties in with the transient nature of my 'Falling Shadows' images - a series that now happily spans my Gallery and Instagram images. Incidentally, this is the 100th Instagram image - what better way to start this post?

The night shot above top right is part of an Instagram series called 'Against The Dark' - I've always liked the illuminated windows of houses from outside, particularly very late at night when you only see them here and there. I rarely have my camera with me on the way home after a night out, but this new camera phone regime has let me look at these patches of light and colour photographically.

Most of my pictures are taken on the street, as I am passing through from one thing to another, rather than on a determined 'photo session' outing. Phone pictures let me work on a real 'hit and run' basis. The image bottom left was taken somehow as I rushed onto a train platform and squeezed it in before my train left - there would not have been enough time to get my DSLR out. As it turned out, I passed this way again later, and I'd liked the Instagram shot so much, I went back to that spot to get a Gallery shot of it.

The last example here at bottom right was taken over the top of someone's head, on a busy London Underground train. Though I might have gotten away with this with a big DSLR, it could have made the rest of my journey very uncomfortable!

Lesson Eight - Instagram and DSLR images each offer their own strengths 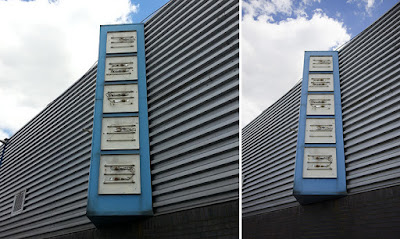 Lesson Two after one month was 'phone images are real photographs'. I think at that stage I was honestly still a little bit on the fence about this, but trying hard to embrace the phone camera. I would say now I have absolutely taken the plunge, and somewhat surprisingly for me, the phone camera has actually replaced my DSLR in many ways. I'm taking less and less pictures now on my DSLR - I realise I have an archive now of 1000s of images dating back 20 years, and maybe taking a little break and not adding to that for a while may be a good thing.

Richard Wentworth, a photographer I very much admire, recently mentioned in a talk that he sees his addiction to taking pictures as an illness. I can somewhat identify with that, it's definitely an itch that needs to be scratched, and it seems Instagram can scratch it as well as a DSLR can.

This doesn't mean I don't take any pictures with my DSLR any more- some things are too good to pass up. Sometimes I shoot on both phone and DSLR - if the image fits.

Two examples above show how things change between the formats - the Instagram image on the left (unfiltered and unfiddled with as always), and an early draft of the DSLR image on the right. The tonal range and image details on the DSLR image is of course much better - perfect for prints (this is why I call them 'Gallery images'!), but that's not really seen on a phone or tablet screen, or necessarily appreciated by the Instagram audience.

The first shot, of the railings, also gives a good example of how a composition might need to be a little more colourful to make in an impact in amongst all the others on Instagram, and how the more traditional rectangular image shape created a different image in my mind, one that requires a bit more looking perhaps. The second shot also shows this I think - I prefer the taller Gallery image, it has more space to breathe, but the Instagram shot has more impact because it is so cropped and feels like it's pushing it's way out of the frame. 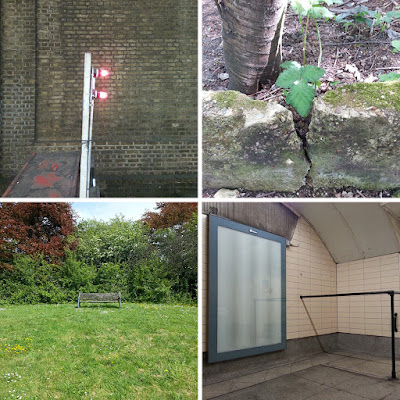 Seems like a simple lesson - but this is something that I might have forgotten since I started showing my work publicly again in 2011. Even the most simple gallery show requires selecting images, getting prints, probably frames too, collating information, writing a press release, hanging the work, publicising the show and so much more.

Very little of this has anything to do with what I enjoy most - creating a picture within a set frame, of something I have seen and enjoyed, and wanted to take away as an image. Even that can be frustrating with a DSLR. With the phone camera, it's fairly easy to see if it's going to work as an Instagram picture or not, and if it doesn't I am able to move on or just delete it.

Like many photographers, my most important audience to please is myself. How does that fit with the 'sharing' nature of Instagram? Well, I've always felt I'd like my pictures to be seen by other people, hopefully to pass on that little bit of pleasure I got from creating the image. That's why I have gallery shows, this blog, the Facebook page, to get my pictures in front of other people.

With Instagram, I can take a picture in seconds and have it shared around the world within hours. It's so easy, I've been able to keep up one a day for more than 100 days, when - confession time - I do somewhat neglect this blog and the Facebook page.

Lesson Ten - I like following a handful of photographers in detail 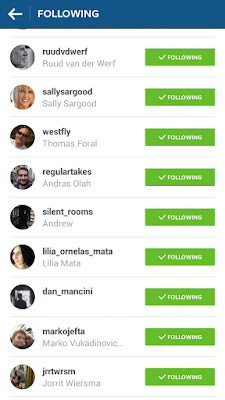 Another seemingly obvious point - but for me, an important one. I love looking at other people's great photography. In the past this has meant gallery visits, art books, perhaps a few friends and the pictures they choose to share with me personally or on Facebook, and the photographers who I meet regularly as part of The Rooftop Collective in London.

Now, Instagram feeds me a set of images from the people I've chosen to follow. And most of these have been found by clicking on them when they've liked one of my pictures. This gives me a a set of kindred spirits all over the world, people whose pictures I am excited to see, and whose work I can get to know in depth as the weeks go on. And, let's not forget, this is work I would never have seen otherwise. Some examples that spring to mind -

For now there's just a select few feeds I follow, and I fully realise for every photographer I follow there are 100 others on Instagram I might like just as much, or more, but I'm easy with that. The key to Instagram for me is to keep it simple. Too many followings and I would lose touch with the body of work and the style of each one. 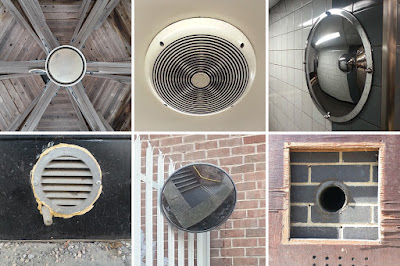 My Instagram feed was created to act as a sketchbook - each day, a new page, a new image, each independent of each other. After 100 images though, I can scroll through my feed and spot some collections of images that share some of the same elements or feel.

Sometimes this has been intentional - like the aforementioned Against the Dark series, sometimes it's a set of locations that share a similar feel - playgrounds, car parks. Sometimes it's a compositional feature like a strong diagonal or a central circle.

These things are easier to spot on my Instagram feed rather than in amongst the morass of my Gallery images. It's another one of Instagram's little pleasures for me - and something I might do some work on at some point, perhaps collating a few little collections. This, however, would be making things complicated, and I've been enjoying keeping it simple...

Lesson Twelve - I'm bothered about Likes and Followers, but not that bothered 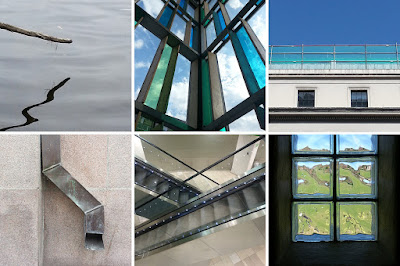 So far I haven't talked about Likes and Followers - a part of Instagram that is clearly very important to a lot of users.

I always click through to have a look to see who's liked my images, sometimes this leads me to fake Instagram accounts loaded with generic pictures of boobs, bums and beaches, cocktails, cars and cats. The profile promises me lots of new Followers and Likes if I visit their website.

Perhaps it's because I grew up in the generation before Social Media, but this chasing of artificial Likes and Followers to just bump up your numbers and compete is of no interest to me. What excites me is finding new people to follow after they Liked one of my pictures, or making interesting connections - I wrote about this last time as Lesson Six - 'it's great to be Liked, better if it's an interesting Like'. It's also nice to get a Like from a photographer whose work you respect.

Of course, with Instagram being so simple there's very little to analyse other than the figures for Likes and Followers. I use iconosquare.com to keep track of how it's all going. At the moment I have a small number of followers, and I pick up one or two organically every week. Which is all well and good. With Likes, as always, it's interesting and surprising who Likes what, and which pictures have the most. The pictures above are my current market leaders.

I'm certainly small fry in the world of Instagram, I'm no Social Media butterfly and I don't announce my account all over the place. I use hashtags to enhance and maybe explain the pictures, rather than in a calculated way to gain exposure. Consequently my pictures don't get seen as much as they might.

My modest Likes are fine with me, there's enough going on that I can compare reaction from one picture to the next. I've seen pictures on my news feed that are uninteresting to me, getting hundreds of likes, whilst some of my own favourites from my account sit at the bottom of my Like league table. So chasing Likes and trying to cater for my audience would make no sense for me. I'll just continue to try and make pictures I like!

After 100+ images, I'm not going to stop - I'm having a great time with it! Apart from the occasional Facebook share, I'm not showing these pictures anywhere else. So if you're on Instagram, please do join me @paulcliffordartist . If you're not, you can still see all the pictures at instagram.com/paulcliffordartist .

Posted by Paul Clifford Photography at 21:07